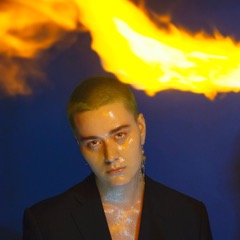 Vienna-based multidisciplinary artist and producer Veronika J. König has created the prototype for a new type of pop music under the name FARCE with her debut album ‘Heavy Listening’ (out now via Futuresfuture). She writes and produces her songs in the bedroom, does not think much of hierarchy and instead relies on a DIY mindset and aesthetics.

The result is an incredibly multi-layered and succinctly produced album that does not need to shy away from comparisons with international pop artists such as St. Vincent, Charli XCX or Grimes. The 55 minute-long LP is in sync with what is and was created in a first-time collaboration with the Viennese musician and producer Nikolaus Abit.

Unimpressed by the analogue fetish of the current music landscape, the album effortlessly bridges the gap between trap beats and distorted guitars, from soul samples to trance pop hooks. FARCE is a glossy, plastic laminated, form-perfect, queer pop star for the last days of mankind and at least the first week after.

You may not have heard of her yet, but slowly but surely, Farce is starting to make a name for herself, especially after the release of the infectious ‘Zozan’. With her experimental music and unique style, many are calling her the future of avant-garde pop music, especially given its potential to merge with the mainstream.

Her debut album ‘Heavy Listening’ came out on Futuresfuture on 17th of October, listen to it in full below. See if you agree with the hype.