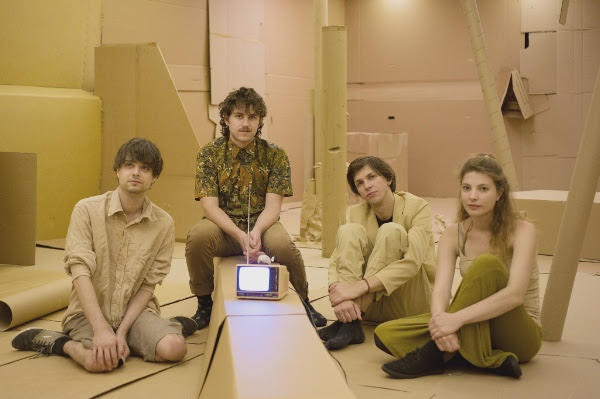 ‘Elevator’ is Bird of the Year’s second video release from the 2017 released Split LP with Raccoon Rally.

The video is set in a room completely lined with cardboard. People emerge from the familiar material as they would do in their normal daily life. Adapted to their environment, they blend into the spatial installation built by Graz-based artist Maria Schneider.

The installation stands for the interweaving of the world of thought and people who spend a vile everyday life in front of the television and daydreaming of better things, although they actually wander through a colourful intellectual world of dance, wonderful experiences and more…

The four (sometimes five) musicians make no secret of the fact that playing together in a band sometimes feels like being in a box, sent by post to perform at different locations. The balancing act between waiting for something to happen and the frenetic mania of everything is the construct that holds Bird of the Year together, well, this and countless rolls of tape….

Watch the video below.

MORE TRACKS FROM BIRD OF THE YEAR